Hand Shakes During Job Interviews – Getting It Right

Job interviews are fraught with many challenges, and unless you are well informed; not just well-prepared; it is most likely that you will falter during the interviews.

The fact is that, job interviews are all about performances. It’s not the best interviewee or the most intelligent job seeker that wins the day, but the one that performs the best. Delivering a great performance during an interview is all about being informed. Often times, many interviews take a different turn and what the job hunter faces will then be totally different from expectations.

However, there are certain tests and corporate ethics skills that the job candidates are always passed through in almost all recruiting exercises and we will be having a look at one of them in this write up.

Job interviews are all about performances, and it’s the best performer that wins the day. Therefore, it’s important that the job hunter be aware about certain ethics relating to the interview. One such very important area where many job seekers fail out is in the area of the handshake.

Let’s have a look at the different kinds of handshakes and how they could potentially cost you a job or land you one.

The Different Kinds of Handshakes

There are different kinds of handshakes, and recruiting officers are now using it to look into the personality of job hunters as they recruit. 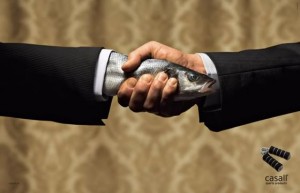 This is so not true.

In fact, the dead fish handshake is a clear giveaway of someone with serious issues of inferiority complex covered up with an outward show of pride. It also shows that someone is not serious or very casual; meaning you are not taking the job in question seriously.

The hand crusher is when you grab the recruiter officer’s hand in a very firm grip and then squeeze as if you are crushing the palm. This is quite the opposite of the dead fish handshake. 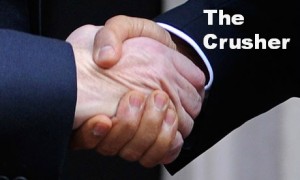 While it’s not good to leave your hand limp, it’s equally wrong to squeeze the palm of the interviewer. You could be read to be an aggressive go-getter, and unknowing hurting the recruiter officer could break the rapport which you are supposed to build the very first seconds of meeting.

This kind of handshake is very common among the youths. It involves shaking hands and ultimately grinding the knuckles of the fingers against that of the interviewer.

This is so wrong. 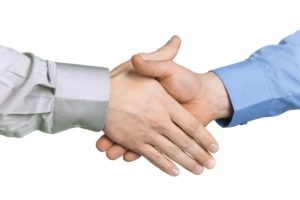 Knuckle grinding should only be observed between friends and in informal surroundings; not during interviews or corporate meetings. Knuckle grinding connotes a carefree personality and casualness. This should only be between friends who have known each other for quite some time; not with the interviewer you might be meeting for the very first time.

You want to be taken seriously, so avoid this kind of handshake at all cost.

The professional hand shake is the proper way of shaking hands during job interviews and corporate meetings. It involves a firm grip of the palm that doesn’t extend to the wrist. It should come with a smile, while looking into the face of the recruiting officer, and the exchange of verbal pleasantries. 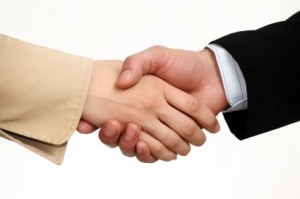 A firm professional handshake shows that a person is confident, informed and has a sense of corporate ethics. This kind of handshake is often seen on television during adverts especially from the financial sectors.

Just a firm professional handshake, and it goes to tell a lot about your personality.

Other Weird Forms of Pleasantries

In conclusion, I will add that you should NEVER place your hand on the shoulder of the recruiting officer after a handshake even if you feel you are elderly or taller. Do not lie down on the floor to greet the recruiting officer even if he / she is an elderly person. Don’t bow down or curtsy. Don’t greet severally as you shake hands, like saying ‘Good morning Sir’ up to three times.

Exchanging pleasantries, especially with handshakes, goes a long way to detailing the direction that the interview will go. Use it to build rapport between yourself and the interviewer.

Remember to always wear a winning smile as you shake hands.